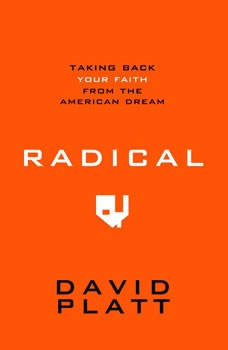 Radical: Taking Back Your Faith From the American Dream

It's easy for American Christians to forget how Jesus said his followers would actually live, what their new lifestyle would actually look like. They would, he said, leave behind security, money, convenience, even family for him. They would abandon everything for the gospel. They would take up their crosses daily...BUT WHO DO YOU KNOW WHO LIVES LIKE THAT? DO YOU? In Radical, David Platt challenges you to consider with an open heart how we have manipulated the gospel to fit our cultural preferences. He shows what Jesus actually said about being his disciple--then invites you to believe and obey what you have heard. And he tells the dramatic story of what is happening as a "successful" suburban church decides to get serious about the gospel according to Jesus. Finally, he urges you to join in The Radical Experiment --a one-year journey in authentic discipleship that will transform how you live in a world that desperately needs the Good News Jesus came to bring.

Legendary college basketball coach John Wooden and Jay Carty know that when it comes down to it, success is an equal opportunity player. Anyone can create it in his or her career, family and beyond. Based on John Wooden’s own method to victory...