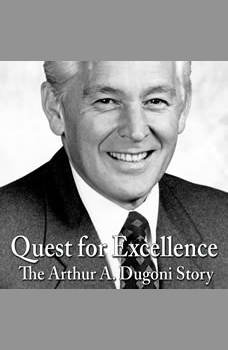 Quest for Excellence: The Arthur A. Dugoni Story

Read by Dr. Dugoni’s son, Jim, this is a reflection of a truly remarkable man. In 2004, the University of the Pacific's School of Dentistry, located in San Francisco since its inception in 1896 as the College of Physicians and Surgeons, was named the Arthur A. School of Dentistry in his honor. He is a former president of the American Dental Association and many other dental professional organizations, and served as Dean of the now eponymous dental school for an unprecedented 28 years. As recently as 2020 at age 95, he continues to spread his philosophy of philanthropy with part-time work as part of the Development Office team of gift officers. Dr. Dugoni's story, compiled from over two years of interviews, takes listeners from his Italian immigrant family roots and early years in San Francisco, to his rise to the heights of dental education, practice and leadership - and everything in between. Twenty one chapters explore various influencing aspects of Dr. Dugoni's life and of his family as well. The biography was written by San Francisco journalist and author Martin Brown.

Booker T. Washington, Builder of a Civilization by Emmett J. Scott, Lyman Beecher Stowe IT IS not hyperbole to say that Booker T. Washington was a great American. For twenty years before his death, he had been the most useful, as well as the most di...

A must-read for parents, new teachers, and classroom veterans, Educating Esme is the exuberant diary of Esme Raji Codell's first year teaching in a Chicago public school.  Fresh-mouthed and free-spirited, the irrepressible Madame Esme--as she p...