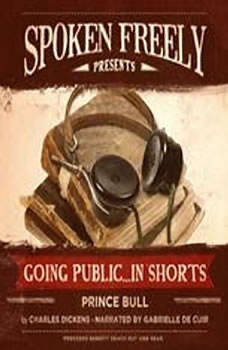 Charles Dickens created some of the worlds most memorable fictional characters. Widely regarded as the greatest writer of the Victorian period, his novels and short stories continue to be widely popular today. One of his lesser known works, Prince Bull is the story of a powerful prince named Bull; his lovely wife called Fair Freedom; and Tape, his wicked fairy godmother. Though written in fairy tale form, the story is a satirical commentary on Crimean War. Proceeds from sale of this title go to Reach Out and Read, an innovative literacy advocacy organization.

A Short History of Myth
by Karen Armstrong

What are myths? How have they evolved? And why do we still so desperately need them?The history of myth is the history of humanity; our stories and beliefs, our curiosity and attempts to understand the world, link us to our ancestors and each other....

This is the story that came before, when Britain was just a Shadowland. We grow up with the Legend of King Arthur, but where did he come from? Who was Merlin? What part did the Druids play in bringing Arthur to his round table? On the night of M...

This collection of classic stories delves into the fascinating lore of Norse mythology to reveal the tales of Odin, Thor, Freya, and more. Compiled over a century ago, Foster & Cummings' writings give life to the stories that inspired the Viking...

Maya and the Turtle: A Korean Fairy Tale
by Soma Han

Soma's mother, T.M. Song, was a storyteller and this is a tale she used to tell her daughters when they were little girls. Her mother had told it to her when she was growing up in a rural village in Korea during the reign of King Kojong.. The underl...

The Story of the Volsungs
by null Anonymous

Originally written in Icelandic in the thirteenth century AD by an anonymous author, The Story of The Volsungs is a legendary saga based on Norse mythology. The epic describes the legendary history and heroic feats of several generations of mythic V...

The Lightning Queen
by Laura Resau

A stunningly rendered mystical novel, set in the remote mountains of Mexico in the 1950s, illuminates the power of an unlikely friendship that blends cultures, magic, and possibilities. Nothing exciting happens on the Hill of Dust, in the remote m...

Ragnarok
by A. S. Byatt

Ragnarök retells the finale of Norse mythology. A story of the destruction of life on this planet and the end of the gods themselves. Just as Wagner used this dramatic and catastrophic struggle for the climax of his Ring Cycle, so A.S. Byatt no...

The Celestine Prophecy
by James Redfield

THE #1 BESTSELLING INTERNATIONAL PHENOMENON - NOW WITH A NEW PREFACEYou have never read a book like this before--a book that comes along once in a lifetime to change lives forever.In the rain forests of Peru, an ancient manuscript has been discover...

Young Trot and the old captain, peg-legged Cap'n Bill, might seem like odd friends, but they are constant companions and Cap'n Bill taught her to love and appreciate the ocean. Trot was especially fascinated by the idea of mermaids and talked about ...