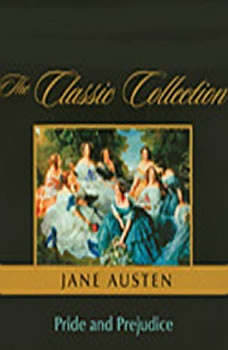 Jane Austen's insightful and sometimes wry Pride and Prejudice provides today's listeners with a fascinating look into the British society during the nineteenth century.This delightful novel of manners follows the Bennets, a family of five daughters and humble fortune. With her savory wit and satire, Jane Austen unveils the lives of the Bennet sisters as they endeavor to find their place in society—some taking a long road to get there. The arrival of Mr. Bingley and Mr. Darcy turn their pastoral lives upside down, and listeners will take in the story with rapt attention, eager to discover if Elizabeth, cured of her prejudice, and Mr. Darcy, cured of his pride, will finally fall into each other's arms.This novel is part of Brilliance Audio's extensive Classic Collection, bringing you timeless masterpieces that you and your family are sure to love.