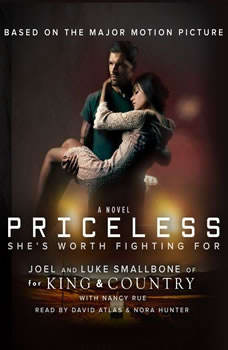 Priceless: She's Worth Fighting For

The powerfully compelling novelization of the major motion picture (October 14, 2016) by Joel and Luke Smallbone of the band for KING & COUNTRY.

James Stevens was, at one time, a good man with a great life. After the tragic death of his wife and losing custody of his little girl, James is at the darkest crossroad of his life. Angry, desperate, and unable to hold down a steady job, he agrees to drive a box truck on a shady, one-time trip cross country for cash -- no questions asked. When he discovers what he is delivering is actually a who, the questions in his mind begin haunting him mercilessly. James becomes an unlikely hero who must fight to save the lives of two young women and finds himself falling in love with one of them.

Can love, strength, and faith redefine his past and change the course of his future?