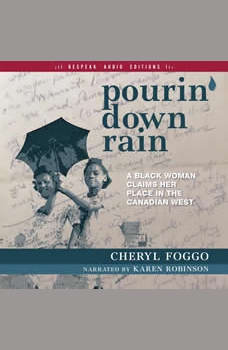 Pourin' Down Rain: A Black Woman Claims Her Place in the Canadian West

Cheryl Foggo came of age during the 1960's in Calgary, a time when a Black family walking down the street still drew stares from everyone they passed. During her childhood, a community of extended family and friends, with roots in the Black migration of 1910 across the western provinces, worked together to provide intervals of respite from racism. But as an adolescent, Cheryl struggled to understand the negative attitudes towards Blackness she and her family encountered, and how she was made to feel an outsider in the only place she ever knew as home. As she explores her ancestry, what comes to light gives her the confidence to claim her rightful place in the Canadian west as a proud Black woman. This beautiful, moving work celebrates the Black experience and Black resiliency on the prairies.

Bespeak Audio Editions brings Canadian voices to the world with audiobook editions of some of the country’s greatest works of literature, performed by Canadian actors.

Mama Used to Say
by Hannibal B. Johnson

In Mama Used to Say, Hannibal Johnson flawlessly captures the collective wisdom passed from generation to generation with a beguiling blend of wit, wisdom, and insight. Following each of the heartwarming nostalgic narratives are the most quotab...