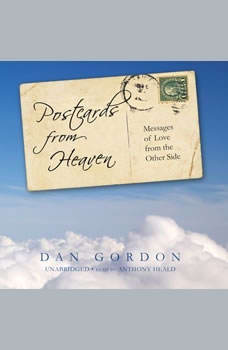 Postcards from Heaven: Messages of Love from the Other Side

A postcard from heaven is not a revelation from on high—rather, it is a whisper, a brush of the presence of someone who’s passed away. Though subtle, these coincidences are uncanny enough to suggest that they come from the spirits of lost loved ones, and they have a deeply comforting effect. In the tradition of Tuesdays with Morrie, screenwriter Dan Gordon shares the uplifting and poignant story of a remarkable family and how they remain intertwined in one another’s lives even after passing to the other side. Introducing us to four colorful generations of strong Jewish characters, he describes the funny and touching ways in which family love travels across boundaries of time, space, personality, and even death.

Why is God Laughing?
by Deepak Chopra, M.D.

In this refreshing new take on spirituality, bestselling author Deepak Chopra uses a fictional tale of a comedian and his unlikely mentor to show us a path back to hope, joy, and even enlightenment–with a lot of laughter along the way. Meet Mi...

Alchemists sought to transform lead into gold. In the same way, says Tara Bennett-Goleman, we all have the natural ability to turn our moments of confusion and emotional pain into insightful clarity.Emotional Alchemy maps the mind and shows how, ac...

What is it that makes someone truly successful? Is it hard work, intelligence, luck? Actually, it’s none of those things. After working with many clients who have the kind of success most people only dream of I discovered the “Success Fo...

Empath: Learn about Yourself through Enneagrams and Meditation
by Stephanie White

Book 1: EmpathIn a world of self-absorbed individuals, socially impaired ignoramuses, and annoying distractions in busy lives, we need empaths. The empath clearly senses and empathizes with other individuals more easily. He or she can feel in a dist...