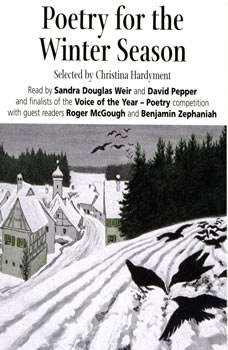 Poetry for the Winter Season

Narrator: Read by winners of the Naxos Audiobooks-The Times Voice of the Year competition

In November 2005, hundreds of people submitted recordings of Shakespeare, Wordsworth and Roger McGough in an attempt to win a prize – participation in the recording of this new poetry collection by Christina Hardyment, historian and audiobook reviewer for The Times. The collection covers a wide range of classics by Shakespeare, Keats, Clare, Blake and others, as well as modern poems by Roger McGough among others. They are read mainly by the male and female first prize winners, but also by the runners-up. Poetry reading is alive and well in Britain!

Elizabeth Barrett Browning (1806–1861) and Christina Rossetti (1830–1894) were both regarded as the female poet laureates of their time, and between them their writings spanned almost the entire Victorian age, from the end of Romanticism...

John Donne, Andrew Marvell, George Herbert, Thomas Carew and Henry Vaughan: these were some of the 17th-century writers who devised a new form of poetry full of wit, intellect and grace, which we now call Metaphysical poetry. They wrote about their ...