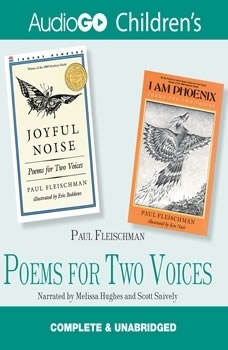 Poems for Two Voices: Joyful Noise and I Am Phoenix

Paul Fleischman is a master of sound, incorporating a soaring, energetic musicality into his writing. His poems for two voices-"Joyful Noise" and "I Am Phoenix"-make for irresistible listening. Whether funny, sad, boisterous, or serene, each poem is a virtuoso performance, skillfully illuminating a unique personality from the natural world.