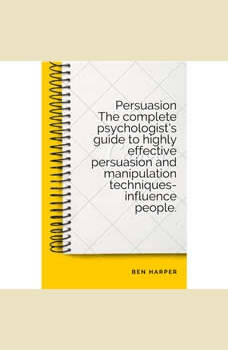 It’s never easy to feel like you might be getting taken advantage of. Whether it’s a spouse, a friend, a relative, a child, a sibling, or even just the person that makes your coffee in the morning, anyone is capable of taking advantage of other people.

In the same way, anyone is at risk for being the person that is getting manipulated. Even the most powerful people might be under the influence of someone else’s manipulation. Having control over another person is a very powerful feeling, and some people use this as their life source. Other people have been so controlled by others throughout their lives that they don’t have an identity other than the one of their abuser.

This book aims to break apart three main ways that someone might be getting taken advantage of. There will be examples of how to identify this type of manipulation, and what can be done to stop and prevent further toxic behavior.

The first step in the recovery process is understanding manipulative behavior at its core. It’s important to figure out what a manipulator looks like, and how they might specifically take advantage of other people. By understanding this you're better equipped to identify and defend against the manipulation.

This book isn’t going to be about how to use these techniques on others to manipulate them. Manipulation is dangerous and it’s crucial to understand the damage that this tool can do. Many people live unhappy lives because they have been so manipulated by others. It’s time for that deception to end, and instead, you should be putting focus on improving relationships and overall self-esteem.

Just because someone is a victim of manipulation doesn’t mean they might not also be a manipulator themselves. Often, the two go hand in hand. It’s tricky behavior, but if more is known about it, there will be a better understanding of how to stop this toxic pattern.

How To Do Algebra
by HowExpert

If you want to learn how to solve algebra problems faster with less effort, then get the "How To Do Algebra".In this step-by-step guide, you will discover tips, techniques, and strategies on how to become better at Algebra from an Algebra teacher's ...

With respect to finger counting among civilized peoples, we fail, then, to find any universal law; the most that can be said is that more begin with the little finger than with the thumb. But when we proceed to the study of this slight but important...

Teaching in the Online Classroom
by Doug Lemov

A timely guide to online teaching strategies from bestselling author Doug Lemov and the Teach Like a Champion team School closures in response to the COVID-19 coronavirus pandemic resulted in an immediate and universal pivot to online teaching. Mo...

o What is Dark Psychology? Discover the dark side of your mind!o Psychological Manipulation in the forensic fieldo The "Dark Triad" of personality o What Is NLP (Neuro Linguistic Programming)? A method to enhance personal developmento The Persuasion...

The Lyndon Technique: The 15 Guideline Map To Booking Extended and Unplugged
by Amy Lyndon

WORKING ACTORS WORK THE LYNDON TECHNIQUE! "EXTENDED AND UNPLUGGED" is the Advanced Level version of Amy Lyndon's Internationally recognized, "THE 15 GUIDELINE MAP TO BOOKING TECHNIQUE." The Lyndon Technique: is the secret weapon for 40+ Network Se...

How to Learn Any Language
by Peter Ashton

You’ve been doing it all wrong! Trust me! So you’ve taken some German classes. Whoop-de-do! Are you good at it yet? Maybe mediocre at best, right?  So you’ve learned all the ways to conjugate a Spanish verb. Do you t...

Smart Sugars is an easy to read book about the breakthrough of sugar technology that will change the way we live. The author explains that some 800,000 transmitting antennae called glycans actually sugar coat each of our healthy cells like fuzz on a...