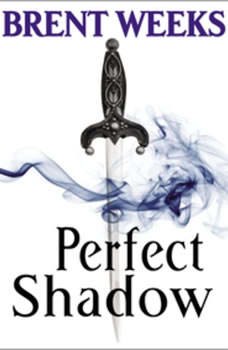 For the first time as an Orbit special edition, Brent Weeks's blockbuster novella Perfect Shadow tells the origin story of the Night Angel trilogy's most enigmatic character: Durzo Blint. Also includes the short story, I, Nightangel. Gaelan Starfire is a farmer, happy to be a husband and a father; a careful, quiet, simple man. He's also an immortal, peerless in the arts of war. Over the centuries, he's worn many faces to hide his gift, but he is a man ill-fit for obscurity, and all too often he's become a hero, his very names passing into legend: Acaelus Thorne, Yric the Black, Hrothan Steelbender, Tal Drakkan, Rebus Nimble.But when Gaelan must take a job hunting down the world's finest assassins for the beautiful courtesan-and-crimelord Gwinvere Kirena, what he finds may destroy everything he's ever believed in.Find out how it all started in this brilliant Night Angel novella!Night AngelThe Way of ShadowsShadow's EdgeBeyond the ShadowsNight Angel: The Complete Trilogy (omnibus)Perfect Shadow: A Night Angel NovellaThe Way of Shadows: The Graphic NovelLightbringerThe Black PrismThe Blinding KnifeThe Broken EyeThe Blood Mirror

American author, Brent Weeks, had a very normal American upbringing upon being born in Whitefish, Montana in 1977. He developed a love for literature, which we all know can carry its readers to faraway places, escaping the reality of everyday living. He had a great fondness for Edgar Allen Poe, so his genre of writing was fantasy and mystery.

Weeks first novel, The Girl, was a complete failure, but as he says in his biography, skipping the boring parts, he has written eight best-selling novels. They include The Night Angel Trilogy and the Lightbringer Series for which he won several literary awards, and sold millions of copies. He also had a NYT best seller in his 2012 book, The Blinding Knife.

Weeks graduated from Hillsdale College in 2000 with an English degree. Before being a serious author, he taught briefly and was a bartender. He found his girl, Kristi Barnes, they were married and live in Oregon with their two daughters.