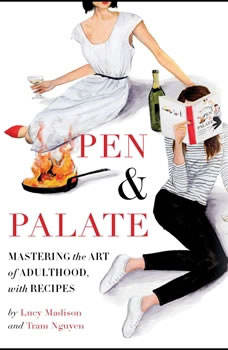 Pen & Palate: Mastering the Art of Adulthood, with Recipes

From the writers of acclaimed blog Pen & Palate, a humorous coming-of-age (and mastering-the-art-of-home-cooking) memoir of friendship, told through stories, recipes, and beautiful illustrations. Getting through life in your twenties isn't easy--especially if you're broke, awkward, and prone to starting small grease fires in your studio apartment. For best friends Lucy Madison and Tram Nguyen, cooking was an escape from the daily humiliation that is being a twenty-something woman in a big city. PEN & PALATE traces the course of Lucy and Tram's devoted friendship through miserable jobs and tiny apartments, first loves and ill-advised flings, successes and setbacks--always with a shared love of food at the center of the narrative. A modern take on Laurie Colwin's classic Home Cooking, this coming-of-age memoir for the Girls set weaves together comical (mis)adventures and recipes meant to be shared with a best friend and a bottle of wine.

Food is our common ground, a universal experience. –James BeardThe saga of the Chili Queens of San Antonio, NASCAR kitchens tucked away in the crew pits at race tracks, the story of an unexpected kitchen—the George Foreman Gril...

Throughout Maya Angelou’s life, from her childhood in Stamps, Arkansas, to her world travels as a bestselling writer, good food has played a central role. Preparing and enjoying homemade meals provides a sense of purpose and calm, accomplishme...

Tales from the Tummy Trilogy
by Calvin Trillin

The Way to a Woman's Heart
by Chuck Snyder

Celebrated chef Mike Stevenson’s cookbook uses the universal language of food to draw in women and men from all walks of life to the Table of Love & Relationships. With the adour of amazing food recipes and enticing relationship treats and wis...