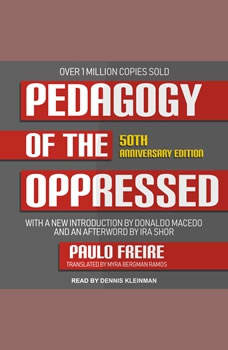 First published in Portuguese in 1968, Pedagogy of the Oppressed was translated and published in English in 1970. Paulo Freire's work has helped to empower countless people throughout the world and has taken on special urgency in the United States and Western Europe, where the creation of a permanent underclass among the underprivileged and minorities in cities and urban centers is ongoing. This 50th anniversary edition includes an updated introduction by Donaldo Macedo, a new afterword by Ira Shor, and interviews with Marina Aparicio Barberan, Noam Chomsky, Ramon Flecha, Gustavo Fischman, Ronald David Glass, Valerie Kinloch, Peter Mayo, Peter McLaren, and Margo Okazawa-Rey to inspire a new generation of educators, students, and general audiences for years to come.

The Souls of Black Folk
by W.E.B. Du Bois,Ronald Riley

William Edward Burghardt Du Bois (1868-1963) is the greatest of African American intellectuals--a sociologist, historian, novelist, and activist whose astounding career spanned the nation's history from Reconstruction to the civil rights movement. B...

Beyond Good and Evil
by Friedrich Nietzsche