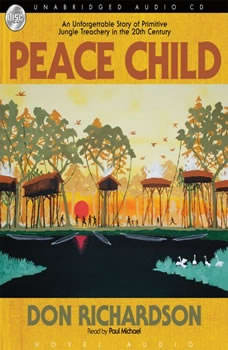 Peace Child: An Unforgettable Story of Primitive Jungle Treachery in the 20th Century

In 1962, Don and Carol Richardson risked their lives to share the gospel with the Sawi people of New Guinea. Here is their unforgettable story of living among these headhunters and cannibals who valued treachery through fattening victims with friendship before the slaughter. God gave Don and Carol the key to the Sawi hearts via a redemptive analogy from their own mythology. The "peace child" became the secret to unlocking a value system that existed through generations over centuries, possibly millenniums, of time. This analogy became a stepping-stone by which the gospel came into the Sawi culture and started both a spiritual and social revolution from within. With an epilogue updating how the gospel impacted the Sawi, this missionary classic will inspire a new generation of readers to hear this unforgettable story and the lessons it teaches us about communicating with Christ in a meaningful way to those around us.