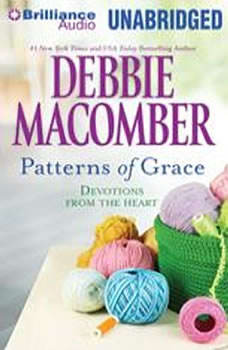 Patterns of Grace: Devotions from the Heart

With more than 140 million copies of her books in print, Debbie Macomber is one of today's most popular authors. The #1 New York Times bestselling author is best known for her ability to create compelling characters and bring their stories to life. Drawing on her own experiences and observations, Debbie writes from the heart in this very personal devotional book, opening a window into the faith of the writer behind the stories. In her true first-person devotions, learn about how God transformed her marriage and her heart, how a Bible verse helped simplify her life, how she learned to not just pray but to listen, and how she sees God's fingerprints all over her life. Through chapters like 'Thank-You Notes to God' and 'Be a Blessing,' listeners will be encouraged to see the patterns of God's grace making their own lives beautiful.

The Wait Devotional
by DeVon Franklin

In The Wait, DeVon Franklin and Meagan Good, a Hollywood power couple who famously saved sex for marriage, shared the life-changing message that waiting—rather than rushing—can be the key for finding the person you're meant to be with. ...

Ancient Secrets of Mystical Yoga - The Icon Das Avatar Series: The Divine Pastimes Of Lord Varaha - The Boar Incarnation Of The Supreme Personality Of Godhead.
by H.G. Jagannatha Dasa

The Vedas are a 5000-year-old esoteric, intriguing, mystical body of work which carries within it the seed of divine, transcendental knowledge. We live in a world wherein yoga now reigns supreme as the preferred, go to method of modern spiritual rea...

Her story is amazing enough to inspire a major motion picture. Back on the surfboard just one month after losing her arm in a shark attack, professional surfer Bethany Hamilton became the cover girl of courage, inspiring millions around the world. I...

How do we practice II Corinthians 10: 3-5, “tearing down strongholds by captivating our minds with the knowledge of God”? Beth Moore shows you how in Praying God’s Word. A topical prayer guide addressing fourteen common stronghold...

A Treasury of Miracles for Women
by Karen Kingsbury

USA Today and New York Times bestselling author Karen Kingsbury is beloved across the nation for her moving tales of faith and redemption. In A Treasury of Miracles for Women, Kingsbury recounts uplifting true stories in which mothers, wives, sister...

Explore a life of adventure with God. Looking for adventure? With a week&#8217;s worth of activities for each Bible story, this one-year devotional gives you real-life ways to live out God&#8217;s spiritual adventure every day. Each week&amp...

In this inspiring devotional, Choosing Life -- One Day at a Time, Dodie Osteen shares her personal spiritual insights -- blending Scriptures with godly exhortations and effective prayers -- to exhort, comfort, and edify both men and women. Her perso...

“If you bite and devour each other, watch out or you will be destroyed by each other.” - Galatians 5:15 It is unbelievable to see how even believers can disagree. One side sticks their feet in and the other side does also. No one is budg...

The Vedas are a 5000-year-old esoteric, intriguing, mystical body of work which carries within it the seed of divine, transcendental knowledge. We live in a world wherein yoga now reigns supreme as the preferred, go to method of modern spiritual re...