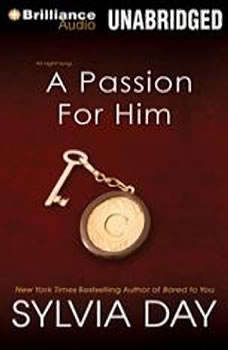 Passion for Him, A

StrangerHe wears a mask…and he is following her. Staring at her like no other man since Colin. But Colin is dead and Amelia believes she will never again shiver with pleasure, never again sigh his name.LoverUntil her masked pursuer lures her into a moonlit garden and a single, reckless kiss. Now she is obsessed with discovering his identity. Perfectly attuned to his every desire, his every thought, she will not stop until she knows his every secret.Praise for Sylvia Day and her novels“Bared to You obliterates the competition…unique and unforgettable.” —Joyfully Reviewed“The undisputed mistress of tender, erotic romance.” —Teresa Medeiros“Boldly passionate, scorchingly sexy.” —Booklist on The Stranger I Married