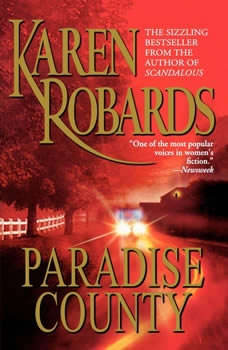 The rolling fields of Shelby County are home to some of the finest horseflesh and bluest blood in Kentucky. With its rural beauty and tranquil lifestyle, it is easy to see why the locals call it Paradise County. But beneath the serene exterior lies a dark underside, and an evil that threatens everyone who touches it.Alexandra Haywood and her younger sister, Neely, have always loved Whistledown, the family's magnificent Shelby County horse farm. After their billionaire father's sudden and tragic death, the devastated Alex returns to Whistledown to try to make peace with her memories -- and to oversee the selling of their gorgeous home. For the family fortune is now a shambles and, like almost everything else the Haywoods own, Whistledown has to go. But Joe Welch, the sexy, handsome farm manager, refuses to cooperate. When Alex fires him, he tells her he has an unbreakable contract and can't be let go.For years Joe has worked to make Whistledown's stables flourish while he struggled to keep his own dreams alive, and no rich rhymes-with-witch is going to threaten his livelihood -- or his family life. Ever since his wife betrayed him years ago, Joe has raised his three kids alone and did it damn well. Now, his always dependable sixteen-year-old son Eli has become hopelessly infatuated with teenage wild child Neely. Joe refuses to let his boy get caught up with Neely -- a nose stud and penchant for illegal substances among her less desirable traits -- and he tells Alex in no uncertain terms.Sparks of rage give way to a fiery attraction when Joe and Alex meet head-on. But just as a volatile passion begins flaring between them, the discovery of a shocking murder with ties to the past rocks the county -- and cuts frighteningly close to home when Neely and Eli disappear.Alex and Joe have only each other to rely on as they search frantically for their loved ones. What they don't know is that they are racing against time, too. Because the evil that lurks beneath the bucolic surface of Paradise County has once again raised its gruesome head -- and now Alex is targeted as the next victim.