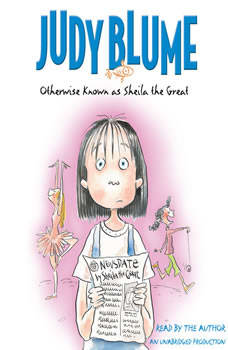 Otherwise Known as Sheila the Great

Sheila Tubman sometimes wonders who she really is: the outgoing, witty, and capable Sheila the Great, or the secret Sheila, who's afraid of the dark, spiders, swimming, and dogs.

When her family spends the summer in Tarrytown, Sheila has to face some of her worst fears. Not only does a dog come with the rented house, but her parents expect Sheila to take swimming lessons! Sheila does her best to pretend she's an expert at everything, but she knows she isn't fooling her new best friend, Mouse Ellis, who happens to be a crackerjack swimmer and a dog lover.

What will it take for Sheila to admit to the Tarrytown kids -- and to herself -- that she's only human?

The Way to Bea
by Kat Yeh

With a charming voice, winning characters, and a perfectly-woven plot, Kat Yeh delivers a powerful story of friendship and finding a path towards embracing yourself.Everything in Bea's world has changed. She's starting seventh grade newly friend...

The barbershop is where the magic happens. Boys go in as lumps of clay and, with princely robes draped around their shoulders, a dab of cool shaving cream on their foreheads, and a slow, steady cut, they become royalty. That crisp yet subtle line ma...

Today Was a Terrible Day
by Patricia Reilly Giff

Follow the humorous mishaps of a second grader who is learning to read. Nothing's going right for Ronald—he drops his pencils, inadvertently squirts water on Joy’s dress, mistakenly eats Jimmy’s sandwich, misses the ball during rec...

How About a Hug?
by Nancy Carlson

What's better than a smile? A great big hug, of course! Hugs are for helping someone feel happy all day, or making a scraped knee feel better, or saying hello to an old friend. Whether it's a Good Morning Hug or a Have a Great Day Hug, it is sure to...

Be true to who you are! And stand up for others, that’s standing beautiful.Each one of us is different in our own unique way, and it’s those differences that make us beautiful.  Come along on a whimsical journey as young Chloe and h...

Deception. Risk. Betrayal. Redemption. Master storyteller Scott Westerfeld is at the top of his game, and back to his most famous realm. Frey and Rafi are inseparable . . . two edges of the same knife. But Frey's very existence is a secret. Frey ...

Every morning, Judy measures Stink, and it's always the same: 3 feet, 8 inches tall. Stink feels like even the class newt is growing faster than he is. Then one day, the ruler reads--3 feet, 7 and three-quarter inches! Can it be? Is Stink shrink...

From the author of The Bar Code Tattoo comes an exciting look at the not too distant future. Mira has always almost had it all... until it all crashes and burns. She's hurt in a horrible car accident, and the only way the doctors can help is to tr...

Ruby the Copycat
by Peggy Rathmann

Ruby is a copycat! It's the first day of school, and Ruby is new. When her classmate Angela wears a flowered dress, suddenly Ruby's wearing one, too. Fortunately, Ruby's teacher knows a better way to help Ruby fit in - by showing Ruby how much fu...