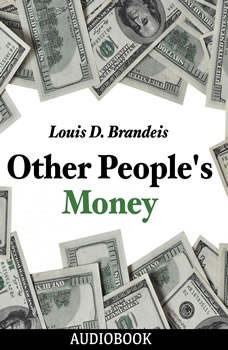 In Other Peoples Money And How The Banks Use It, Supreme Court Justice Louis Brandeis denounces corporatism, monopolies, investment bankers, and above all, the total consolidation of American wealth into the hands of a privileged few. Completely uncensored, there are few indictments of the American banking system as incendiary. LOUIS D. BRANDEIS was an Associate Justice Of The Supreme Court and a patriot. He is widely regarded as one of the greatest crusaders for social justice in our nation's history, credited with drafting our most important Right To Privacy Laws, as well as championing our right to freedom of speech.He wrote "Other People's Money and How Bankers Use It" to warn the American people about the greedy bankers that control the United States and drive us into financial ruin.

When you dig into the details of Bitcoin, it’s an absolutely out of this world story ripped right from a futuristic sci-fi fantasy. And while it may seem like science fiction, it’s getting very real, very fast. Bitcoin is now the best-kn...

Saving Money: The Top 100 Best Ways To Save Your Money And To Spend Your Money Wisely
by Ace McCloud

Discover the best ways to save money and invest it wisely!Do the strategies that have been proven to work to become financially free!This audiobook covers an incredible variety of strategies, ideas, techniques, and lifestyle choices that you can uti...

This book will help you gain a comprehensive insight into the world of manipulation, negative persuasion, and NLP. It blows the lid off the clever and sneaky manipulation tactics people use to overtake you. It is also useful for recognizing operatin...

Million-Dollar Secrets of the Amazon Associates
by Jim Stephens

Amazon.com is the largest marketplace online – a place where you can literally buy everything and caters to virtually everyone all over the world. As an Amazon Associate, you will have the opportunity to tap into a wealth of goods and services...

Money: Who Has How Much and Why
by Andrew Hacker

On the publication of Andrew Hacker's instant classic and bestselling Two Nations: Black and White, Separate, Hostile, Unequal, Newsweek described him as a "political scientist doing with statistics what Fred Astaire did with hats, canes, and chairs...