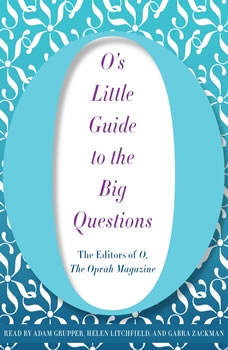 What truly matters?What is my purpose? When is the right time to make a change? Who is most important to me? A thoughtful and provocative collection of personal essays, O’s Little Guide to the Big Questions highlights the wisdom to be gained from engaging with life’s deepest mysteries.Award-winning and bestselling writers for O, The Oprah Magazine have been tackling these and other crucial questions since the magazine’s inception. In this audiobook, they share their eye-opening, soul-expanding insights. Among the many jewels in the collection, Terry Tempest Williams describes the utter shock of opening her late mother’s journals—and the lessons she gleaned from what she found inside; Thich Nhat Hanh finds compassion in the midst of anger; Julie Orringer reveals how we can know when we’ve found “the one.” Offering valuable perspective to anyone feeling lost or in need of a reset, O’s Little Guide to the Big Questions is proof that while the search for meaning can be daunting, it’s also clarifying, motivating, empowering, and the surest path to becoming the person you were meant to be.