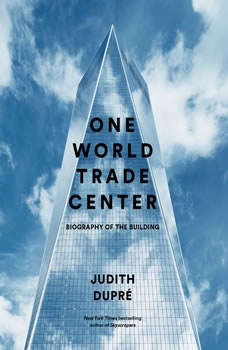 One World Trade Center: Biography of the Building

The behind-the-scenes story of the most extraordinary building in the world, from the bestselling author of SkyscrapersIn this groundbreaking history, bestselling author Judith DuprA© chronicles the most astonishing architectural project in memory: One World Trade Center.The new World Trade Center represents one of the most complex collaborations in human history. Nearly every state in the nation, a dozen countries around the world, and more than 25,000 workers helped raise the tower, which consumed ninety million pounds of steel, one million square feet of glass, and enough concrete to pave a sidewalk from New York to Chicago. With more than seventy interviews with the people most intimately involved, and unprecedented access to the building site, suppliers, and archives, DuprA© unfurls the definitive story of fourteen years of conflict and controversy-and its triumphant resolution. This fascinating, oversize book delivers new insight into the 1,776-foot-tall engineering marvel, from design and excavation through the final placement of its spire. It offers:Access to the minds of world-class architects, engineers, ironworkers, and other tradespeoplePanoramas of New York from One World Observatory-1,268 feet above the earthDramatic cutaways that show the building's advanced structural technologiesA time-lapse montage showing the evolution of the sixteen-acre site Chronologies tracking design, construction, and financial milestones, with rare historic photographsIt also features extensive tour of the entire Trade Center, including in-depth chapters on Two, Three, Four, and Seven World Trade Center; the National September 11 Memorial & Museum; Liberty Park; St. Nicholas National Shrine; and the soaring Transportation Hub. One World Trade Center is the only book authorized by the Port Authority of New York & New Jersey, and the one book necessary to understand the new World Trade Center in its totality. This is a must-have celebration of American resilience and ingenuity for all who are invested in the rebuilding of Ground Zero.You may be surprised by what you find inside-and you will undoubtedly be inspired.

A “palace” ruled by a “queen,” Harbor Hill in Roslyn, Long Island, was commissioned by the beautiful and imperious Katherine Duer Mackay, wife of one of the country’s wealthiest men. Stanford White, the architect, wrote...