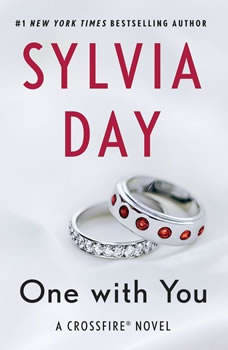 FROM #1 INTERNATIONAL BESTSELLING AUTHOR SYLVIA DAYThe final chapter in the global blockbuster Crossfire quintetGideon Cross. Falling in love with him was the easiest thing I’ve ever done. It happened instantly. Completely. Irrevocably.Marrying him was a dream come true. Staying married to him is the fight of my life. Love transforms. Ours is both a refuge from the storm and the most violent of tempests. Two damaged souls entwined as one.We have bared our deepest, ugliest secrets to one another. Gideon is the mirror that reflects all my flaws…and all the beauty I couldn’t see. He has given me everything. Now, I must prove I can be the rock, the shelter for him that he is for me. Together, we could stand against those who work so viciously to come between us.But our greatest battle may lie within the very vows that give us strength. Committing to love was only the beginning. Fighting for it will either set us free…or break us apart.Heartbreakingly and seductively poignant, One with You is the breathlessly awaited finale to the Crossfire saga, the searing love story that has captivated millions of readers worldwide.