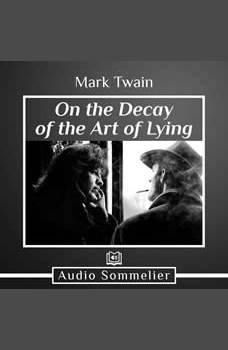 On the Decay of the Art of Lying

Why buy our paperbacks?

Standard Font size of 10 for all books

Don't buy cheap paperbacks just to save a few dollars. Most of them use low-quality papers & binding. Their pages fall off easily. Some of them even use very small font size of 6 or less to increase their profit margin. It makes their books completely unreadable.

How is this book unique?

In 1880, the great American author and humorist Mark Twain wrote his essay "On the Decay of the Art of Lying" for a Historical and Antiquarian Club meeting in Hartford, Connecticut. Twain's humorous and satirical voice is in full flower, as he discusses the universal pastime of lying, and suggests that judicious lying should be encouraged and cultivated - as long as one strives ..".to lie with a good object, and not an evil one; to lie for others' advantage, and not our own; to lie healingly, charitably, humanely, not cruelly, hurtfully, maliciously..." This short work is part of Applewood's "American Roots" series, tactile mementos of American passions by some of America's most famous writers and thinkers.