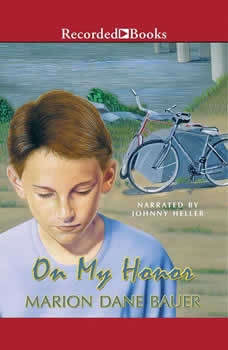 The sun beats down on 7th-graders Joel and his best friend as they pedal up and down the hills outside of town. Before leaving home, Joel had solemnly promised his father-on his honor-they would only go to the state park. He didn't explain they were planning a daring climb on the sheer river bluffs there. But on the way, when the boys reach the bridge over the raging Vermillion River, they change their minds. They will cool off in the water instead of pedaling so many miles. After all, isn't swimming safer than rock climbing? Critically-acclaimed author Marion Dane Bauer creates a compelling story of choices and their consequences. On My Honor is not only a soul-stirring novel, but an exciting adventure book as well. With his compassionate performance, narrator Johnny Heller provides the perfect voice for Joel as he struggles with his conscience.

The Afterlife
by Gary Soto

Adept at portraying Latino teenage culture, author Gary Soto has won many honors, including an ALA Best Book Award for his young adult novels. After an East Fresno student is murdered, his mind leaves his body. Now he must get used to being an invis...