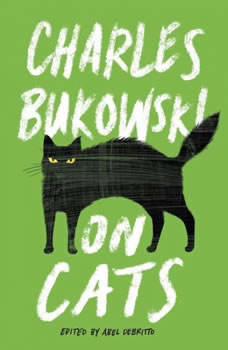 A raw and tenderly funny look at the human-cat relationship, from one of our most treasured and transgressive writers.“The cat is the beautiful devil.”Felines touched a vulnerable spot in Charles Bukowski’s crusty soul. For the writer, there was something majestic and elemental about these inscrutable creatures he admired, sentient beings whose searing gaze could penetrate deep into our being. Bukowski considered cats to be unique forces of nature, elusive emissaries of beauty and love.On Cats offers Bukowski’s musings on these beloved animals and their toughness and resiliency. He honors them as fighters, hunters, survivors who command awe and respect as they grip tightly onto the world around them: “A cat is only ITSELF, representative of the strong forces of life that won’t let go.”Funny, moving, tough, and caring, On Cats brings together the acclaimed writer’s reflections on these animals he so admired. Bukowski’s cats are fierce and demanding—he captures them stalking their prey; crawling across his typewritten pages; waking him up with claws across the face. But they are also affectionate and giving, sources of inspiration and gentle, insistent care.Poignant yet free of treacle, On Cats is an illuminating portrait of this one-of-a-kind artist and his unique view of the world, witnessed through his relationship with the animals he considered his most profound teachers.

Opening with the exotic Lady Death entering the gumshoe-writer's seedy office in pursuit of a writer named Celine, this novel demonstrates Bukowski's own brand of humour and realism, opening up a landscape of seamy Los Angeles.