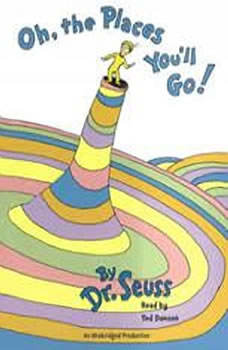 "Don't be fooled by the title of this seriocomic ode to success; it's not 'Climb Every Mountain,' kid version. All journeys face perils, whether from indecision, from loneliness, or worst of all, from too much waiting. Seuss' familiar pajama-clad hero is up to the challenge, and his odyssey is captured vividly in busy two-page spreads evoking both the good times (grinning purple elephants, floating golden castles) and the bad (deep blue wells of confusion). Seuss' message is simple but never sappy: life may be a 'Great Balancing Act,' but through it all 'There's fun to be done.'"
--(starred) Booklist.

Clark the Shark: Afraid of the Dark
by Bruce Hale

Clark the Shark is ready for his first big sleepover! He’s nervous about sleeping outside without his glow-fish night-light, but he doesn’t want anyone to know he’s just a teeny-tiny bit afraid of the dark. So Clark makes up a rhy...

The Year of Billy Miller
by Kevin Henkes

Things to know about Billy Miller: He's worried about 2nd grade He thinks bats are cool His little sister is annoying He had a spectacular accident this summer He doesn't like poetry much His dad makes really good cookies Ned ...

This clever picture book will prepare young explorers to boldly go where they have never gone before: Planet Kindergarten. Suit up for a daring adventure as our hero navigates the unknown reaches and alien inhabitants of this strange new world. Hila...

It’s not easy being the middle child, especially when your dad is a Navy Chief. Meet Piper Reed, a spunky nine-year-old who has moved more times than she can count on one hand. From Texas to Guam, wherever Piper goes, adventure follows, inspir...

Number One Kid. That’s what Mitchell McCabe’s favorite T-shirt says. He’d like to be Number One at the Zigzag Afternoon Center, where there are lots of fun activities to choose from: swimming, nature walks, field trips, art, even h...

Where Are You Going, Baby Lincoln?
by Kate DiCamillo

What if timid Baby Lincoln broke free of her bossy sister and set off on an unexpected journey? Kate DiCamillo presents a touching new adventure set in Mercy Watson’s world.Baby Lincoln’s older sister, Eugenia, is very fond of telling Ba...

26 Fairmount Avenue #2: Here We All Are
by Tomie dePaola

In this delightful sequel, award-winning author-illustrator dePaola shares engaging childhood memories about siblings, school, and life as a five-year-old.

The countdown to college has begun.When Elizabeth receives her freshman-year roommate assignment at the beginning of summer, she shoots off an email to coordinate the basics: TV, microwave, mini-fridge. She can't wait to escape her New Jersey beach...

Oh No, Astro!
by Matt Roeser

Asteroids! Planets! Astronauts! In this charming debut picture book, a grumpy asteroid named Astro is thrown out of orbit and takes an unexpected journey through space! Astro is a cranky asteroid who just wants everyone to respect his personal bound...