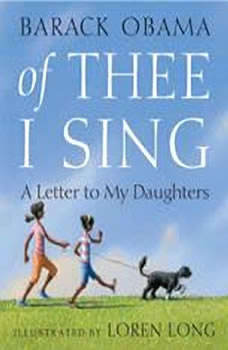 Of Thee I Sing: A Letter to My Daughters

Former president Barack Obama delivers a tender, beautiful letter to his daughters in this picture book illustrated by the award-winning Loren Long (Otis) that's made to be treasured!

In this tender, beautiful letter to his daughters, President Barack Obama has written a moving tribute to thirteen groundbreaking Americans and the ideals that have shaped our nation. From the artistry of Georgia O'Keeffe, to the courage of Jackie Robinson, to the patriotism of George Washington, President Obama sees the traits of these heroes within his own children, and within all of America’s children.

Breathtaking, evocative illustrations by award-winning artist Loren Long at once capture the personalities and achievements of these great Americans and the innocence and promise of childhood.

This beautiful book celebrates the characteristics that unite all Americans, from our nation’s founders to generations to come. It is about the potential within each of us to pursue our dreams and forge our own paths. It is a treasure to cherish with your family forever.

This book informs about the effects of alcohol--critical information considering more than 20% of kids ages 12-17 currently use alcohol, according to the 1997 National Survey on Drug Abuse.

The moving, true story of the young woman dubbed "The Voice of America's Bullied"; how her bond with her dog, Izzy, changed her life; and their mission to help break the cycle of bullying. In middle school, Gabrielle "Gabe" Ford developed a dege...

Printz Honor-winner and NEW YORK TIMES bestselling author Carolyn Mackler brings honesty and charm to this middle-grade debut tracing the friendship of two girls. Meet Hannah. Her name is a palindrome. Her birthday is on New Year's. Her mom died w...

Save Me a Seat
by Sarah Weeks; Gita Varadarajan

From award-winning author of Pie Sarah Weeks and debut author Gita Varadarajan comes a story that shows us the beautiful ways our lives end up being much more similar than we ever imagine. Two boys -- one white, one Indian American -- gain strengt...

"Every day, Danny does something to frighten Craig.... Craig is smaller and far too scared to tell even his parents, let alone his teachers. He is miserable. And every day, Danny tries harder to make it worse." On the internet, on playgrorounds, ...

The Memory of Light
by Francisco X. Stork

School: failure. Romance: failure. Family: failure. Suicide: failure. This brave and moving novel by the author of Marcelo in the Real World is about the one thing left: living. When Vicky Cruz wakes up in the Lakeview Hospital Mental Disorders war...

<p>Someday Heaven provides biblically based answers on a topic that&rsquo;s not always easy to explain to a young child. The warm, illuminating art of Wayne McLoughlin helps to convey each touching story of the future God promises to his ...

In this companion to Openly Straight, Ben confronts pressure at school, repression at home, and his passion for two very different people in figuring out what it takes to be Honestly Ben. Ben Carver is back to normal. He's working steadily in his ...

BE WHO YOU ARE. When people look at George, they think they see a boy. But she knows she's not a boy. She knows she's a girl. George thinks she'll have to keep this a secret forever. Then her teacher announces that their class play is going to be...