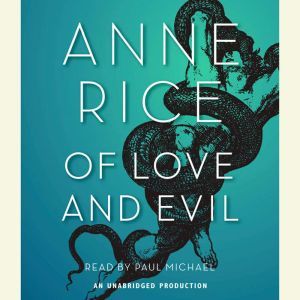 Of Love and Evil: The Songs of the Seraphim, Book Two

Series: Songs of the Seraphim Series

“I dreamed a dream of angels. I saw them and heard them in a great and endless galactic night. I saw the lights that were these angels, flying here and there, in streaks of irresistible brilliance . . . I felt love around me in this vast and seamless realm of sound and light . . . And something akin to sadness swept me up and mingled my very essence with the voices who sang, because the voices were singing of me . . . ”

Thus begins Anne Rice’s lyrical, haunting new novel, a metaphysical thriller of angels and assassins that once again summons up dark and dangerous worlds set in times past. Anne Rice takes us to other realms, this time to the world of fifteenth-century Rome, a city of domes and rooftop gardens, rising towers and crosses beneath an ever-shifting layer of clouds; familiar hills and tall pines . . . of Michelangelo and Raphael, of the Holy Inquisition and of Leo X, second son of a Medici, holding forth from the papal throne . . .

And into this time, into this century, Toby O’Dare, former government assassin, is summoned by the angel Malchiah to solve a terrible crime of poisoning and to search out the truth of a haunting by an earthbound restless spirit—a diabolical dybbuk.

O’Dare soon discovers himself in the midst of dark plots and counterplots surrounded by a darker and more dangerous threat as the veil of ecclesiastical terror closes in around him.

As he embarks on a powerful journey of atonement, O’Dare is reconnected with his own past, with matters light and dark, fierce and tender, with the promise of salvation and with a deeper and richer vision of love.