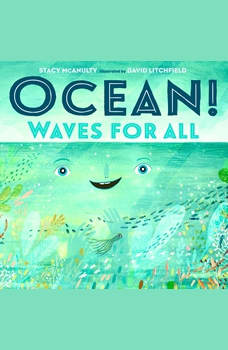 Ocean! Waves for All

From writer Stacy McAnulty and illustrator David Litchfield, Ocean! Waves for All is a light-hearted nonfiction audiobook about the formation and history of the ocean, told from the perspective of the ocean itself.

Dude. Ocean is incredible. Atlantic, Pacific, Artic, Indian, Southern—it's all excellent Ocean! Not part of any nation, his waves are for all. And under those waves, man, he holds so many secrets. With characteristic humor and charm, Stacy McAnulty channels the voice of Ocean in this next "autobiography" in the Our Universe series.

A Macmillan Audio production from Henry Holt and Company