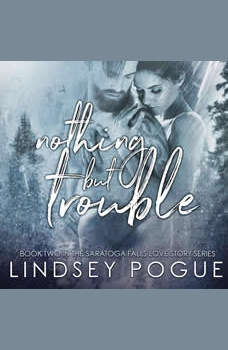 Nothing But Trouble: An Small-Town, Blue-Collar Holiday Romance

A standalone, steamy holiday romance with heaps of heart.

And an attraction to the boss's daughter is the last thing Colton needs. But...

Mac is a lot of things--smart, sexy, and she can curse like a sailor. But behind her megawatt smile and perfectly pink lips are scars that no one sees. She has all but sworn away from men when an inked-up mystery man walks into her dad's auto shop, jaw clenched and glaring at her. Mac's confidence and cocky comebacks begin to fall short, and it's not long before buried pain and unwanted memories resurface. As life throws her one curveball after another, Mac's composed facade begins to waver, and she finds herself drawn into the arms of a man she can barely stand the sight of.

Colton knew Mac was nothing but trouble from the first time he met her, half-naked and cursing at him. A complicated relationship with his boss's daughter is the last thing Colton needs. After all, he came to Saratoga Falls to leave bad decisions behind him. But winter in this small town can be cold and lonely, and Colton finds a certain high-heeled hothead to be more surprising than expected and exactly what he needs.

Nothing But Trouble is a story of passion and tenderness, Christmas trees and snowball fights. It's about the true meaning of family and the sacrifices we make for the people we love.

**This is the second book in a series. Though it can be read as a standalone novel, it's not recommended due to character crossover throughout the series. This story contains mature content, sexual and other.**

Whatever It Takes (Sam and Reilly's second-chance, boy-next-door romance)

Nothing But Trouble (Mac and Colton's small-town, holiday first-love romance)

Told You So (Nick and Bethany's enemies-to-lovers romance)

A love match hotter than the Fourth of July… Wild West Boys, Book 2 Construction worker Willow Gregory entered the annual Miss Firecracker beauty contest on a dare and shocked everyone by winning. After a year of tiara-wearing good behavior, ...

Emma Kelly needs a Christmas miracle. Nick Shepherd loves his life in Salt Spring Island, where he sculpts in a studio with the grizzled and talented artist Mike Nagorski. Mike's estranged daughter, Emma Kelly, arrives in their quiet haven, and tho...

Getting Down
by Helena Hunting

Originally published as part of the USA Today bestselling Eye Candy anthology, Getting Down by Helena Hunting is a hilarious and hot short story set in the Shacking Up world. This steamy audiobook contains a never before published bonus scene!Ruby S...

All signs point north for Not-So-Saint Nick  After too many mugs of mulled wine, introverted accountant Holly North lets her best friend guilt her into filling in as Mistress Christmas at Sugar Plums, a Christmas-themed strip club. The combinat...

Celebrate the season with this warmhearted charmer from #1 New York Times bestselling author Susan Mallery When Princess Bethany’s father, the king, sells one of his best stallions, she insists the animal get the royal treatment. Disguised as ...

Holiday with a Twist
by Shannon Stacey

New York Times bestselling author Shannon Stacey celebrates the season in this brand-new holiday novella After a messy breakup, Leigh Holloway is ready to start her life over. Until her parents put the family home on the market and call her bac...

Mistletoe in Paradise
by Jill Shalvis

Problem Number One – Getting There Old childhood friends each fly separately to join their families on what’s been an annual holiday themed yacht adventure. Secret ex-lovers, Hannah and James are determined to make the best of things&hel...

Hold Her Again
by Shannon Stacey

A country-music star returns home to win back the woman he loves in this charming holiday novella from New York Times bestselling author Shannon Stacey Ava Wright isn't happy to see her high school sweetheart rolling into their hometown a few w...