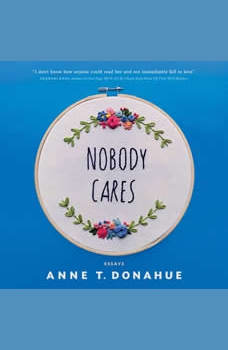 From the author of the popular newsletter That’s What She Said, Nobody Cares is a frank, funny personal essay collection about work, failure, friendship, and the messy business of being alive in your twenties and thirties.

As she shares her hard-won insights from screwing up, growing up, and trying to find her own path, Anne T. Donahue’s debut book offers all the honesty, laughs, and reassurance of a late-night phone call with your best friend. Whether she’s giving a signature pep talk, railing against summer, or describing her own mental health struggles, Anne reminds us that failure is normal, saying no to things is liberating, and that we’re all a bunch of beautiful disasters—and she wouldn’t have it any other way.