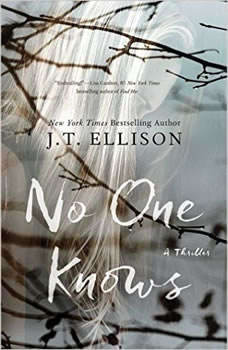 With the same page-turning suspense as The Girl on the Train and The Husband’s Secret, New York Times bestselling author J.T. Ellison's No One Knows is a “riveting…skillfully plotted” (Publishers Weekly) thriller that questions if the narrator’s husband really has returned from the dead—or if she’s merely losing her mind.Aubrey Hamilton has been mourning her missing husband for five years, despite being even while she was considered the prime suspect in his murder. But when he is officially declared dead, there are still more questions than answers: Why didn’t Josh show up at his friend’s bachelor party? Was he murdered, or did he run away? And who is the new, mysterious and strangely familiar figureman suddenly appearing in Aubrey’s life? And has she finally lost her mind after years of loneliness and confusion?No One Knows is an evocative mystery that explores the complex darkness within all of us, perfect for fans of Gillian Flynn, Liane Moriarty, and Paula Hawkins.