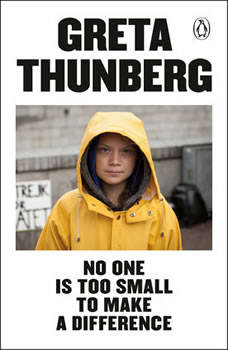 No One Is Too Small to Make a Difference

The groundbreaking speeches of Greta Thunberg, the young climate activist who has become the voice of a generation, including her historic address to the United Nations

In August 2018 a fifteen-year-old Swedish girl, Greta Thunberg, decided not to go to school one day in order to protest the climate crisis. Her actions sparked a global movement, inspiring millions of students to go on strike for our planet, forcing governments to listen, and earning her a Nobel Peace Prize nomination.

No One Is Too Small to Make A Difference brings you Greta in her own words, for the first time. Collecting her speeches that have made history across the globe, from the United Nations to Capitol Hill and mass street protests, her book is a rallying cry for why we must all wake up and fight to protect the living planet, no matter how powerless we feel. Our future depends upon it.

An inspirational story of one man’s quest to save sun bears from extinction.In Asia, adult sun bears are poached for body parts which are thought to have medicinal properties. Orphaned cubs are kept illegally as pets. Natural habitat is disapp...

Save The Planet
by Corine Sombrun

Almir Narayamoga Surui, the Amazonian tribal chieftain of the indigenous Surui people, is a leader in the fight to save the rainforest not only for the preservation of his land and people, but for the Earth's and humanity's survival as well. Joinin...