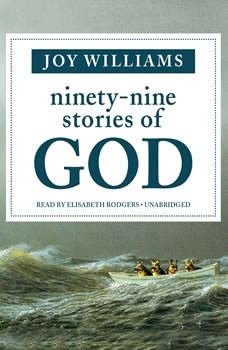 Pulitzer Prize and National Book Award finalist Joy Williams has a one-of-a-kind gift for capturing both the absurdity and the darkness of everyday life. In Ninety-Nine Stories of God, she takes on one of mankinds most confounding preoccupations: the Supreme Being. This series of short, fictional vignettes explores our day-to-day interactions with an ever-elusive and arbitrary God. Its the Book of Common Prayer as seen through a looking glassa powerfully vivid collection of seemingly random life moments. The figures that haunt these stories range from Kafka (talking to a fish) to the Aztecs, Tolstoy to Abraham and Sarah, O. J. Simpson to a pack of wolves. Most of Williams characters, however, are like the rest of us: anonymous strivers and bumblers who brush up against God in the least expected places or go searching for him when hes standing right there. The Lord shows up at a hot-dog-eating contest, a demolition derby, a formal gala, and a drugstore, where hes in line to get a shingles vaccination. At turns comic and yearning, lyric and aphoristic, Ninety-Nine Stories of God serves as a pure distillation of one of our great artists.