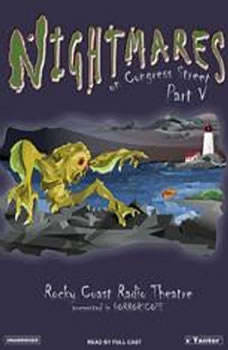 They're baaaaaaaaaaaaacckkkkk!!! Rocky Coast Radio Theatre returns with yet another copious cornucopia of classic concoctions, crafted and compiled for the captive congregation (gotta love that thesaurus!). Nightmares on Congress Street, Part V offers dramatized adaptations (complete with music and sound effects) of chilling stories penned by Edgar Allan Poe, Hugh B. Cave, and H. P. Lovecraft, as well as a few additional treats. So douse the lights, snuggle up with your favorite corpse—oops! "life-challenged" person—and prepare to be thoroughly goosebumped.