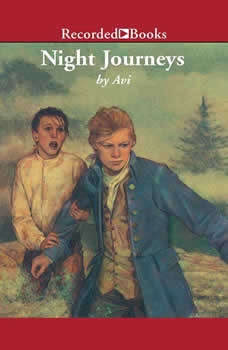 In this colonial adventure tale, set on the Pennsylvania-New Jersey border in 1768, Everett Shinn is enlisted in a search for two runaway indentured servants. Eager for adventure and to become a hero by capturing the runaways himself, 12-year-old Peter York, Shinn's adopted son, volunteers to join the search. Peter assumes that the runaways are swarthy ruffians. When he discovers, however, that they are mistreated children seeking freedom in Pennsylvania, Peter's purpose turns from capturing them to helping them escape. Will Shinn, a devout Quaker of few words, foil Peter's plans, or will the young man receive help from an unexpected source? Avi is an award-winning author. He has written two Newbery Honor books, won the Scott O'Dell Award for Historical Fiction, and an ALA Booklist Best Book of the 1980s. Narrator Jeff Woodman captures all the danger and excitement of this tightly-plotted suspense, and keeps the book moving as rapidly as the flooded Delaware River.

Night after night, a ghost appears in the royal castle of Pergamontio, terrifying the princess. Mangus the Magician doesn't believe in ghosts, but that doesn't stop him from being charged with finding this one. The King demands that Mangus free his ...

In Dimwood Forest, all the mice know that moving beyond Grey House requires the permission of the great horned owl, Mr. Ocax. No one but Mr. Ocax can guarantee protection against the horrible porcupines who lurk in the forest, waiting to grab innoce...

Murder at Midnight
by Avi

Fabrizio, Magnus the Magician's new servant boy, must prove his master's innocence after he is accused of plotting to overthrow the king in this suspenseful new prequel to Midnight Magic from a Newbery Medalist.

Benjamin Franklin: Huge Pain in My...
by Adam Mansbach

Dear Mr. Franklin,First of all, let me just say that this Assignment is Stupid. You are Dead. Why am I writing a letter to Some dead guy I've never even met?This is the start to a most unlikely pen pal relationship between thirteen-year-old Franklin...