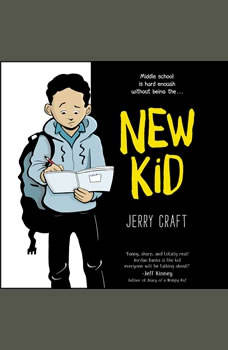 An original full-cast audio adaptation of the graphic novel from award-winning author-illustrator Jerry Craft, performed by the author with Jesus Del Orden, Nile Bullock, Robin Miles, Guy Lockard, Peyton Lusk, Rebecca Soler, Dan Bittner, Phoebe Strole, Marc Thompson, Miles Harvey, and Ron Butler.Perfect for fans of Raina Telgemeier and Gene Luen Yang, New Kid is a timely, honest novel about starting over at a new school where diversity is low and the struggle to fit in is real.Seventh grader Jordan Banks loves nothing more than drawing cartoons about his life. But instead of sending him to the art school of his dreams, his parents enroll him in a prestigious private school known for its academics, where Jordan is one of the few kids of color in his entire grade.As he makes the daily trip from his Washington Heights apartment to the upscale Riverdale Academy Day School, Jordan soon finds himself torn between two worlds—and not really fitting into either one. Can Jordan learn to navigate his new school culture while keeping his neighborhood friends and staying true to himself?Filled with sound effects and original music, this audio adventure is one the whole family will enjoy.

We Rise, We Resist, We Raise Our Voices
by Wade Hudson

The foremost diverse children's authors--including Jason Reynolds, Jacqueline Woodson, and Kwame Alexander--share answers to the question, "In this divisive world, what shall we tell our children?" in this powerful collection, published in partnersh...

The Friendship
by Mildred D. Taylor

Another powerful story in the Logan Family Saga and companion to Mildred D. Taylor's Newbery Award-winning Roll of Thunder, Hear My Cry.Cassie Logan and her brothers have been warned never to go to the Wallace store.  So they know to expec...

Leanora Sutter, Esther Hirsh, Merlin Van Tornhout and Johnny Reeves are among the unforgettable cast inhabiting a small Vermont town in 1924. A town that turns against its own when the Ku Klux Klan moves in. No one is safe, especially the two younge...

From the award-winning author of ALL THE BROKEN PIECES and SERAFINA'S PROMISE comes a new novel-in-verse that is a gripping, transcendent story about a little-known piece of slave history. Grace has grown up in slavery. As difficult as life on the ...

Freedom Over Me
by Ashley Bryan

Using original slave auction and plantation estate documents, Ashley Bryan offers a moving and powerful picture book that contrasts the monetary value of a slave with the priceless value of life experiences and dreams that a slave owner could never ...

From the National Book Award-winning author of Stamped from the Beginning and How to Be an Antiracist comes a fresh new audiobook that empowers parents and children to uproot racism in our society and in ourselves.Take your first...

Walk Across the Sea
by Susan Fletcher

Her family's lighthouse home is an island of enchantment for 13-year-old Eliza Wells. Surrounded by whales, seals, and pelicans, she avoids the problems that beset the mainland: like the increasingly heated conflict between the local town's white an...