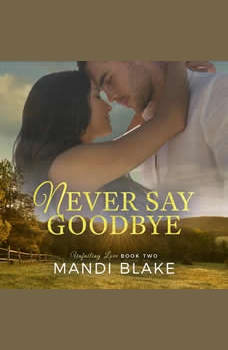 Lindsey Payne left her small, southern hometown six years ago for the bright lights of New York City with big dreams of becoming an actress. Now, she’s returning to Georgia with regrets and hoping to steer clear of those she’s wronged.

Dakota Calhoun fills his days with work to keep his mind busy. The last thing he wants is time to dwell on the past or the mistakes he made. When a ghost from his past comes barreling back into his life, everything gets harder—and more dangerous. Now, Dakota is struggling to stay on the straight and narrow.

Dakota and Lindsey have a past as long as their memories, but their future is tied up in old wounds. They’ll have to decide if they can forgive each other and themselves. Can they overcome the past and have the future they always wanted?

A sweet, Christian romance about forgiveness and grace.

Never Say Goodbye is the second book in the Unfailing Love series, but the books can be read in any order.