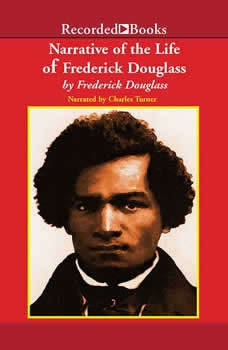 Narrative of the Life of Frederick Douglass, an American Slave

Uncertain of his date of birth or the identity of his father, Frederick Douglass came into the world with one surety: he was born a slave, and would die a slave. But as he grew up, Douglass determined that he would teach himself to read and write, and that one day he would be free from slavery. In 1832, Douglass was sent to a plantation in St. Michael's, where he would live and work as a field hand for more than seven years. According to Douglass, this life was so dispiriting and exhausting, that at times thoughts of freedom all but disappeared from his mind. His journey out of bondage was mental, as well as physical. Douglass would go on to be one of the abolition movement's most persuasive speakers, and would eventually become a strong proponent for women's rights. His famous autobiography, the Narrative, reads like the impassioned plea of an abolitionist tract, compelling in its honest and forceful eloquence. Later Douglass would serve as minister to Haiti and would fight against the southern practice of lynching without benefit of trial by jury. After his first wife's death, he would startle his associates and friends by marrying a white woman, one of the most publicized interracial marriages in America. Douglass died in 1895. He was buried in Rochester, New York.