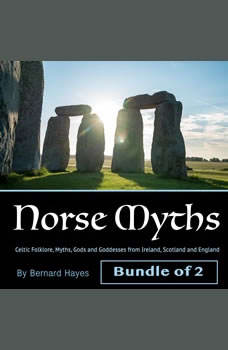 Book 1: In this audiobook, you will find the most important facts about Celtic mythology, a people that is often overlooked or undervalued. Their tales and folklores have their routes in ancient customs and historical events, and with those backgrounds, you will get a greater understanding of the Celts. You will discover:More about the Celtic society, their religion, arts, and the collapse of that society. The Celtic history, traces of their language, and their relationship with the Romans who had conquests on the British Isles.Facts about their technology, warfare, and false stories or notions you may have heard about them. A concise outline of the Celtic gods and goddesses they worshipped and revered. Explanations about festivals and rites, as well as what they thought of cosmology and eschatology.Book 2: The ancient culture of the Celts, with its folklore and fairytales, has sparked the imagination of many. The mythological creatures, stories, and legends have their enchanting flair and have certainly been the topic of many historians and scholars. It is time to dive deeper into some of the best-known myths and epic ventures of the gods, goddesses, and magical realms from the British Isles. You will hear about things like: Cultural backgrounds and the way it integrated with the Celts’ livesThe four cycles of Irish Mythology. This may sound surprising to youThe Selkies and their connection to the CeltsThe coming of Finn and all the drama around itThe Fianna of Erin and the reason why this is such a popular storyDifferent tales from the Ossianic cycle

This book contains proven steps and strategies on how to prepare yourself for the results of having an open third eye. It explains all the elements involved, including what to expect, and the downside of the process, and how to deal with all kinds o...

The Enlightenment Process is described in many historical and religious accounts.But how can one understand what is really happening to the person who experiences different facets of enlightenment if it hasn’t happened to the reader?This is th...

This book offers great thoughts on exercising the mind, organizing your life, the advantages (and disadvantages) of marriage and other pocket philosophies. The objective of this book is to make an individual understand how powerful the mind is. T...

This book seeks to give you information about dry fasting. It explains the concept and elaborates on the different ways it can be done.It also outlines the significant benefits that you get when you go on a dry fast. It highlights how dry fasting ca...

Norse Myths: Viking Mythology with Its Gods and Goddesses
by Bernard Hayes

This book is oriented to those people who are trying to learn what enlightenment is all about, and want to better understand what it is, and how to get there. It is oriented towards beginners who haven't studied previously on the subject. Issues are...

Marigold learns about disables with the help of friends with compassion

Unleash the Financial Giant Within
by Jim Stephens

What's it that makes some people richer and richer and others poorer and poorer? Who has decreed that this divide should exist in our world? Is there any way in which the line can be crossed, and the have-nots can make their place among the privileg...