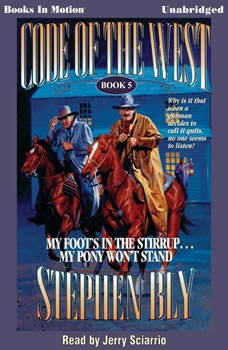 MY FOOT'S IN THE STIRRUP, MY PONY WON'T STAND

Series: Code of the West #5

All Tap and Pepper Andrews want to do is settle down, buy a small ranch, get a few head of cattle, and start raising a family. But nothing is ever that easy for the ex-convict and his former dance-hall girl trying to break from the past. It seems no matte