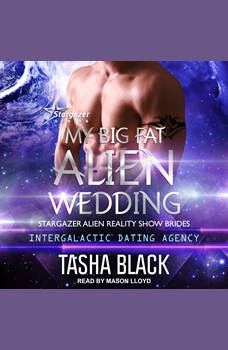 What happens to the wedding planner if things don't go according to plan? Parker never understood the concept of Earth love until he met Ruby. Now he's head over heels for his brother's curvy wedding planner. His heart aches, his pulse throbs, and all the love songs and chick flicks of Earth suddenly make perfect sense to the sexy alien. Ruby is planning an amazing reality show wedding for her best friend, but can't help getting weak-kneed every time the groom's brother is around. When Parker offers to help Ruby so she can bring the wedding off in just one week, Ruby is eager to spend more time with the hunky alien. The only challenge is to hide her attraction from the cameras at all costs-after all, they are supposed to be planning Margot's big day! But when Ruby's old high school crush conveniently arrives on the scene to star on the show as her cowedding-planner, things get complicated quickly. It seems to Parker that the producers have something specific in mind when it comes to Ruby's future. But even with interplanetary relations in the balance, how is he supposed to keep his mouth shut and watch her fall for another man? Contains mature themes.