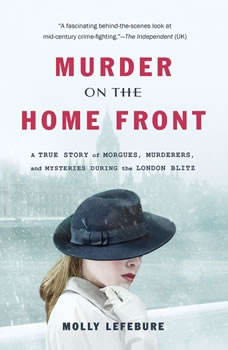 Murder on the Home Front: A True Story of Morgues, Murderers, and Mysteries during the London Blitz

It is 1941. While the "war of chaos" rages in the skies above London, an unending fight against violence, murder and the criminal underworld continues on the streets below.One ordinary day, in an ordinary courtroom, forensic pathologist Dr. Keith Simpson asks a keen young journalist to be his secretary. Although the "horrors of secretarial work" don't appeal to Molly Lefebure, she's intrigued to know exactly what goes on behind a mortuary door.Capable and curious, "Miss Molly" quickly becomes indispensible to Dr. Simpson as he meticulously pursues the truth. Accompanying him from somber morgues to London's most gruesome crime scenes, Molly observes and assists as he uncovers the dark secrets that all murder victims keep.With a sharp sense of humor and a rebellious spirit, Molly tells her own remarkable true story here with warmth and wit, painting a vivid portrait of wartime London.

Jameel McGee: “For the next three years not a day went by that I didn’t think about my son who I had never seen and the cop who had kept me from him. And for most of those three years I promised myself that if I ever saw this cop again, ...

The Case Against Lawyers
by Catherine Crier

As a child, Catherine Crier was enchanted by film portrayals of crusading lawyers like Clarence Darrow and Atticus Finch. As a District Attorney, private lawyer, and judge, she saw firsthand how the U. S. Justice system works, and when it didn't. On...