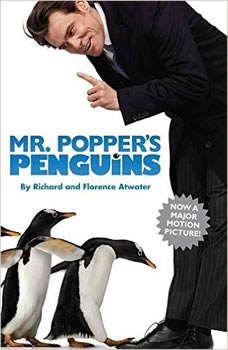 The classic Newbery Honor book that inspired the hilarious Jim Carrey movie--and a childhood favorite book for generations.Mr. Popper's Penguins is one of the handful of American books for children that has attained the status of a classic. A humble house painter is sent a male penguin by the great Admiral Drake and, thanks to the arrival of a female penguin, soon has twelve penguins living in his house. First published in 1938, Mr. Popper's Penguins has amused and enchanted generations of children and their parents.

"Terrific," says Eugene, after winning an all-expenses-paid vacation in Bermuda. "I'll probably get a really nasty sunburn." Unfortunately, Eugene's luck is a lot worse than that. First, his cruise ship sinks, then he ends up stranded on a tiny isla...

Little Owl's Night (narrated by Janet Varney): It's evening in the forest and Little Owl wakes up from his day-long sleep to watch his friends enjoying the night. Hedgehog sniffs for mushrooms, Skunk nibbles at berries, Frog croaks, and Cricket sing...

The Jungle Radio
by Devangana Dash

Come, listen to the sweet jungle orchestra, featuring the Woodpecker's drums, the Hornbill's trumpet and the Kingfisher's blues When curious little Gul hears some strange sounds coming from her radio, she follows the musical clues into . . . an Ind...

One day Benny the woodpecker awakens to the best tummy-rumbling smell ever and discovers it’s something called waffles. He must taste them!He pecks on the door of the waffle house, but he gets the boot.He tries to sneak in, but he gets swept ...

A persevering penguin is determined to fly in this adorably inspiring picture book from the creator of "Red Hat "and "Red Sled." Although little Penguin has the soul of an eagle, his body wasn't built to soar. But Penguin has an irrepressible spiri...

Beyond the Laughing Sky
by Michelle Cuevas

In the tradition of E. B. White and Kate DiCamillo comes the magical and moving story of a bird-like boy who longs to fly.Ten-year-old Nashville doesn’t feel like he belongs with his family, in his town, or even in this world. He was hatched f...