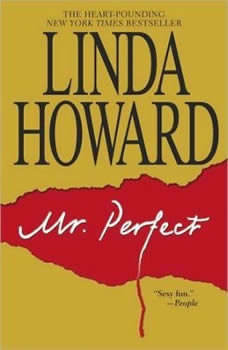 What would make the perfect man? That's the delicious topic heating up the proceedings at a certain table of professional women at their favorite restaurant, Ernie's, tonight: Mr. Perfect. What qualities would he have? Would he be tall, dark, and handsome? Caring and warmhearted -- or will just muscular do? Jaine Bright and her three girlfriends start off with the basics -- he'd be faithful and reliable, the responsible type, with a great sense of humor.But as the conversation picks up momentum, so do the quartet's requirements for Mr. Perfect -- and they write down a tongue-in-cheek checklist that's both funny and racy. The next thing they know, the List, as it has come to be called, spreads like wildfire throughout their company and sizzles along e-mail lines. And it doesn't stop there: the List becomes an overnight sensation, grabbing the interest of local newspapers and television coverage. No one expected this avalanche of attention for something that began as a joke among friends. And the joke turns deadly serious when one of the four women is murdered...The prime suspect in the case is the victim's boyfriend, who was one of a number of men who found the List sexist and offensive. But an impenetrable alibi gets him off the hook. Now, with the help of Jaine's neighbor, an unpredictable police detective, the puzzle must be solved -- and time is running out as a deadly stalker targets the three remaining friends. Now, knowing whom to trust and whom to love is a matter of survival -- as the dream of Mr. Perfect becomes a chilling nightmare.Putting her "trademark darkly sensual style" (Booklist) into high gear, New York Times bestselling author Linda Howard creates a tour de force of passion and suspense in this electrifying new page-turner, and proves that appearances can be deceiving -- and deadly.

Long After Midnight
by Iris Johansen

She wanted to save lives.  The killer wanted to end hers.The first warning was triggered hundreds of miles away.  The second warning exploded only yards from where she and her son stood.  Now Kate Denby realizes the fri...

The Ugly Duckling
by Iris Johansen

If fate suddenly made you more beautiful that you ever dreamed possible, would it be the beginning of a fairy tale, or your worst nightmare?The brutal attack should have killed anybody, but Nell Calder did more than survive. She emerged a woman tran...

Linda S. Howington, an American author, was born in Alabama in 1950. She writes romance/suspense novels under the pseudonym Linda Howard. Inspired by the iconic novel, Gone With the Wind, by Margaret Mitchell, Howard began writing stories for her own enjoyment, until, after 20 years, she finally submitted a novel for publication. That novel set her a on a very successful career.

Linda's husband is a professional bass tournament competitor, and she travels with him and works on her laptop as he is competing. They live on a farm in Alabama in a beautiful, large home, where they raise cattle and have two furry pal golden retrievers.