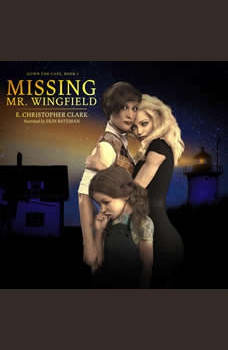 A mother and daughter failed by the men they looked up to. The beginnings of a family saga that stretches across time. Two novels woven together as one.

Veronica Silver’s life feels like an endless list of “what ifs?” Pregnant at sixteen, her strict father shoved her into a loveless marriage far away from the woman she truly loved. But her conflicted mind is in for a reboot when a piano falls out of the sky and triggers a harrowing journey down memory lane.

High-school valedictorian Tracy Silver embraced her uncle as an adult male role model. But her perfect image of him shattered when she caught him with a stripper. Now he’s back in town, and she’s determined to render justice with a magical potion.

Can Veronica and Tracy uncover the deeper truths of their lives by re-examining a lifetime of mistakes?

Missing Mr. Wingfield collects the first two novels of E. Christopher Clark’s series LGBT family saga series The Stains of Time, weaving them together with bonus materials found nowhere else. If you liked The Piano of Death and The Boot of Destiny, you’ll love this mash-up of the two books and the way it brings you even deeper into the stories of Veronica Silver and her daughter Tracy.