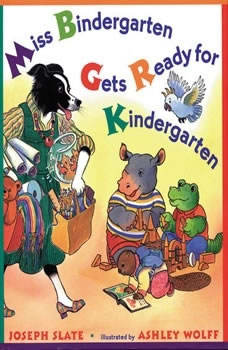 This rhyming book is the perfect way to practice the alphabet and to introduce young children to kindergarten.

It's the first day of kindergarten and Miss Bindergarten is hard at work getting the classroom ready for her twenty-six new students. Meanwhile, Adam Krupp wakes up, Brenda Heath brushes her teeth, and Christopher Beaker finds his sneaker. Miss Bindergarten puts the finishing touches on the room just in time, and the students arrive. Now the fun can begin!

"Multifaceted and appealing, this book can be enjoyed in many ways, at home and at school." --The New York Times Book Review