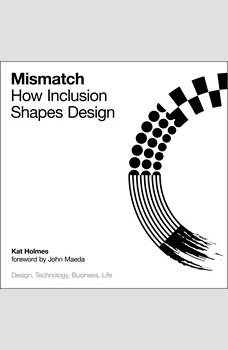 Sometimes designed objects reject their users: a computer mouse that doesn't work for left-handed people, for example, or a touchscreen payment system that only works for people who read English phrases, have 20/20 vision, and use a credit card. These mismatches are the building blocks of exclusion. In Mismatch, Kat Holmes describes how design can lead to exclusion, and how design can also remedy exclusion. Holmes tells stories of pioneers of inclusive design, many of whom were drawn to work on inclusion because of their own experiences of exclusion. A gamer and designer who depends on voice recognition shows Holmes his 'Wall of Exclusion,' which displays dozens of game controllers that require two hands to operate; an architect shares her firsthand knowledge of how design can fail communities; an astronomer who began to lose her eyesight adapts a technique called 'sonification' so she can 'listen' to the stars. Designing for inclusion is not a feel-good sideline. Holmes shows how inclusion can be a source of innovation and growth, especially for digital technologies. It can be a catalyst for creativity and a boost for the bottom line as a customer base expands. And each time we remedy a mismatched interaction, we create an opportunity for more people to contribute to society in meaningful ways.

Download now to get key insights from this book in 15 minutes.Welcome to the age of behavioral addiction - an age in which half of the American population is addicted to at least one behavior. We obsess over our emails, Instagram likes, and Facebook...

The Great Questions of Tomorrow
by David Rothkopf

What do you Know about A.I. ? Here it comes a lot of knowledge on the greatest force that you had seen ever. A.I. is our future, from the past, a great means to arrive on the moon through the rooms of the time