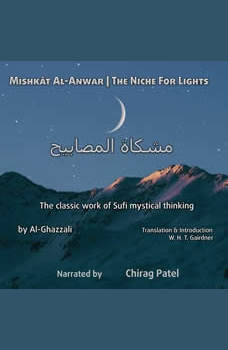 Mishkat Al-Anwar (The Niche For Lights): The classic work of Sufi mystical thinking

The classic work of Sufi mystical thinking from 1100CE, available in audiobook for the first time. It is also known as A Niche of Lamps.

In the middle ages, Sufi scholars reconciled rationality and faith, both of which were ascendant in the empires of the time. This is one of the great philosophical and theological works from that period, and shows another side to Islam than the doctrinaire version that is more commonly spoken of.

Al-Ghazali is often called "the proof of Islam" (hujjat al-islam), because he tried to bridge inquiry, legislation and mystical practice. One could call al-Ghazali the prototype Muslim intellectual.

This translation was done in 1823 by WHT Gairdner, who also includes a commentary upon the ideas that Al-Ghazzali presents.

The Niche of Lights, written near the end of his life, is about the need for balance between the authority of the divine and reason, seeing both as essential to real spiritual development.