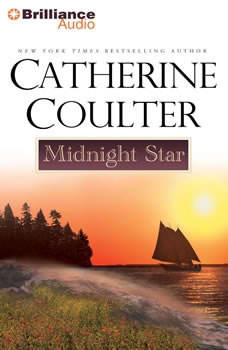 Dear Listener: Midnight Star, the second of the four Star novels, is the story of Delaney Saxton, a man who struck it rich in the California gold rush of 1849 and stayed to build a great city, and Chauncey FitzHugh, an heiress from England who travels to San Francisco to avenge her father. She believes Delaney Saxton ruined him and plans to destroy Saxton in the same way he destroyed her father – leaving him betrayed and penniless. But her prey isn’t what she expected. He is charming, too handsome for his own good, rich – and elusive as a wisp of smoke. As for Chauncey, as bright and creative as she is, she can’t come up with a plan to ruin him financially until, quite by accident, she is hurt and ends up in his bed and in his care. Naturally, one thing leads to another. Chauncey gains what she wants, but soon the tables are turned. These two strong-willed people must overcome their distrust of each other and deal with a relentless killer from halfway across the world. If you missed Midnight Star years ago, do try it now and let me know what you think of this adventure that has more surprises than a cat has whiskers. Catherine Coulter